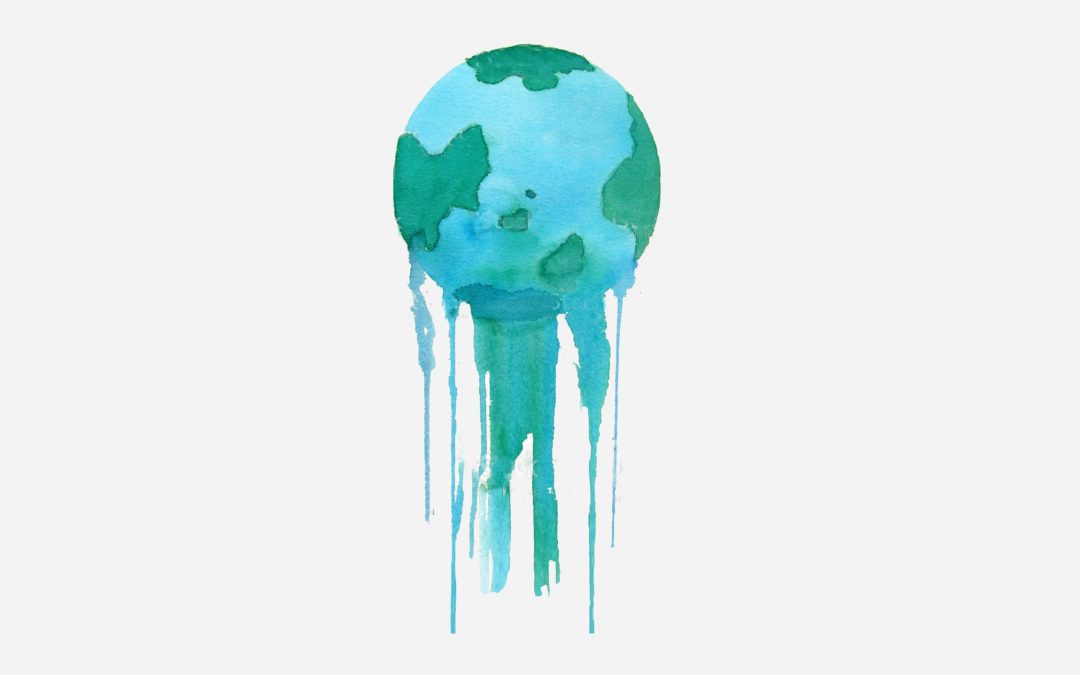 Sea level rise is already forcing some remote communities to move inland, such as in Fiji in the Pacific Ocean where the government relocated 150 people in the village of Vunidogoloa to higher ground in 2014 from a flood-prone coast. World-renowned climate change journalist Alister Doyle, author of The Great Melt, visited Vunidogoloa (the first village in the world to begin relocating to higher ground due to sea level rise) to see the effects of global warming first-hand, shining a light on the most vulnerable people at the shoreline.

“This is my house,” the chief of a Fijian village says, pointing to an old lump of concrete and a few wooden posts jutting out of the brownish sand of a beach shaded by coconut palms.

This is all that remains of the boyhood home of Simione Botu, head of Vunidogoloa village in eastern Fiji. He has already moved inland – not once, but twice – to escape worsening floods along the coast.

“Our heart is here. Our forefathers were here,” he tells me, standing on the narrow beach by the rotted foundations of his first home, washed away decades ago by the Pacific Ocean. 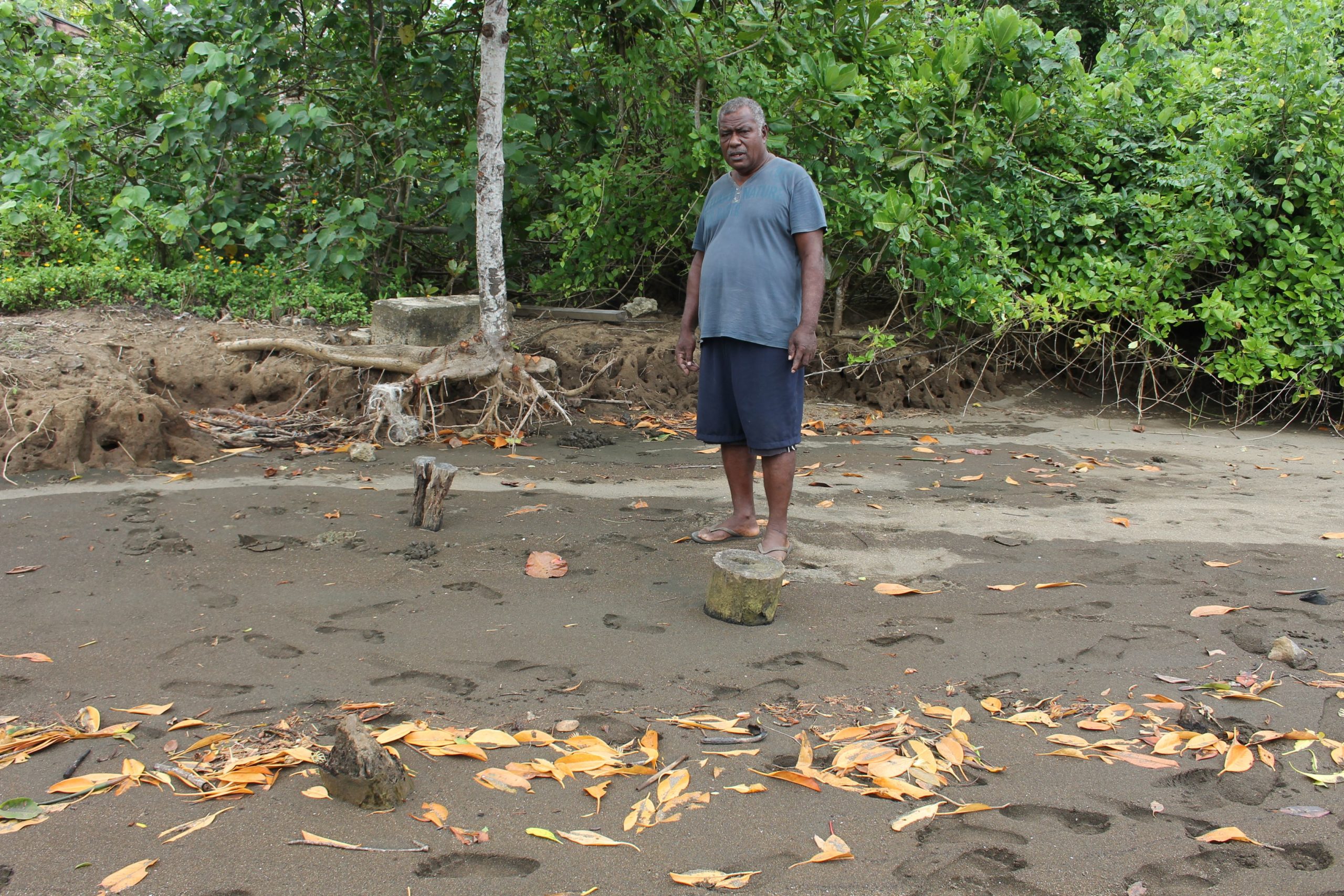 Simione Botu, Chief of Vunidogoloa village in Fiji, stands by wooden stumps sticking out of a beach in eastern Fiji that were once the foundations of his childhood home: it was washed away by storm surges, forcing him to move inland. (Photo credit: Alister Doyle)

During a 2018 visit to Fiji, in the South Pacific east of Australia, Britain’s Prince Harry mentioned Vunidogoloa village as the first to move inland anywhere in the world because of sea level rise. It is a dismal title that could be competed over by several other communities around the globe.

Botu himself is one of a vanishingly small group of people anywhere who have been forced to move from two homes because of coastal flooding.

His trail of displacement is a tale of stubborn resilience, with a happier conclusion in his modern, third house up on the hillside, built by the villagers and the Fijian government.

Old Vunidogoloa village, where Botu grew up, lies on a coast exposed to storm surges caused by Pacific cyclones. It is at the inner end of Natewa Bay, which can act as a funnel for water blown from the ocean into the narrowing inlet. The village is also at the mouth of a meandering river that capriciously devours the shoreline, compounding the harm of sea level rise.

Dressed in a blue T-shirt and black shorts, Botu is certain when I ask him what happened to make his house vanish. “Climate change,” he replies. “Sea level rise, floods, caused this. So, we have to shift to the new site.”

“No matter what we did, the water came through the village,” Botu said of repeated attempts to hold back the sea and the estuary snaking through the village, with makeshift walls. Sea water intrusion disrupted agriculture and the cultivation of coconut, breadfruit and banana trees. 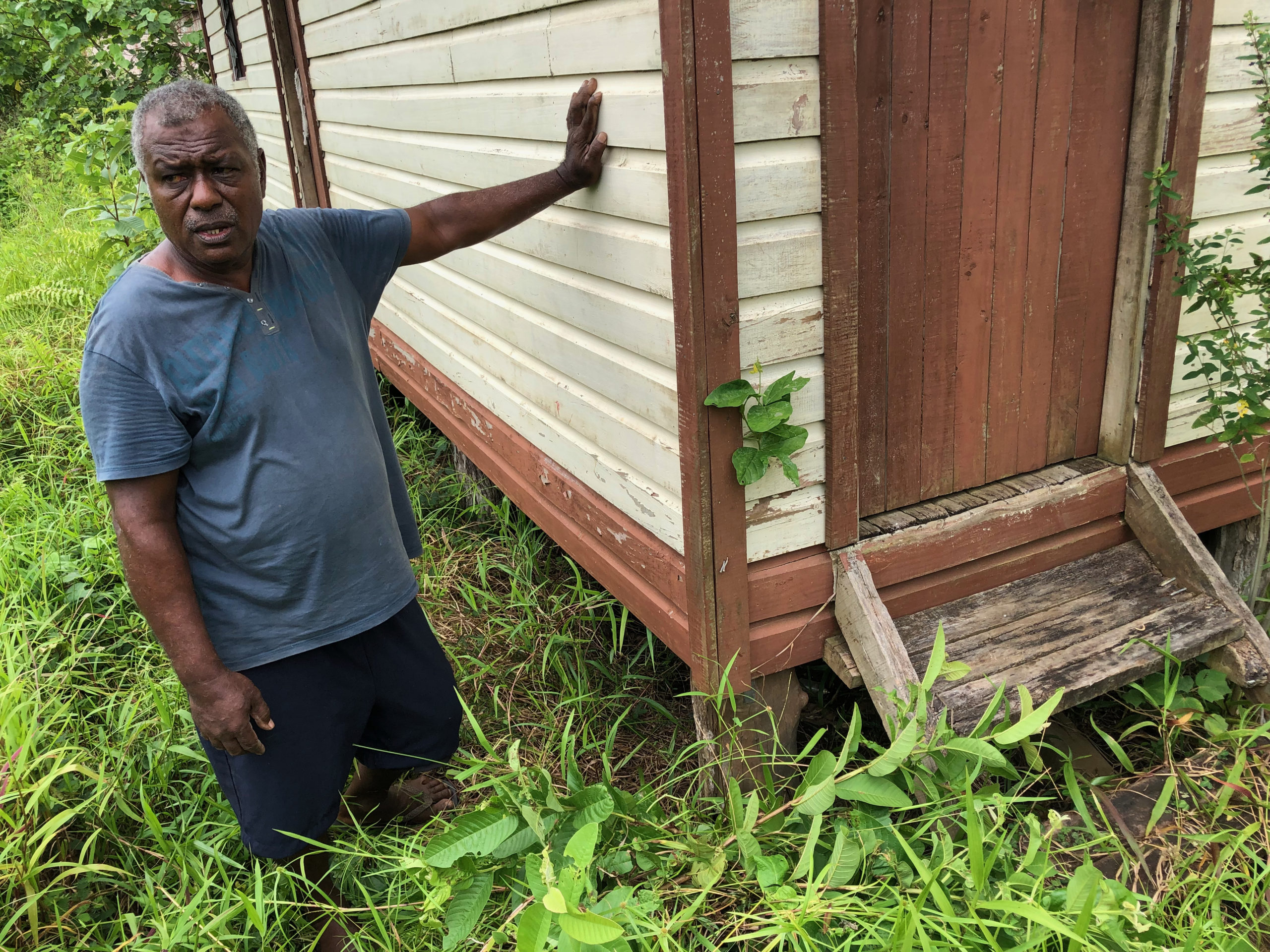 Simione Botu built this house after his childhood home was washed away, forcing him to build about 50 metres inland. But worsening sea floods rotted the foundations of his second house, and he moved to a third home on higher ground. (Photo credit: Alister Doyle)

After years of planning, the entire village of 150 people moved to New Vunidogoloa, about 1.5km inland on a hillside owned by the villagers. The new village comprises thirty-three new one-storey wooden homes, painted light blue. The new village is widely hailed as a successful project since it opened in 2014, despite grumblings on both sides.

The villagers accuse the government of failing to keep promises, while politicians who championed the project complain about ingratitude.

Fiji’s government reported in 2014 that it had spent almost a million Fijian dollars (about US $500,000)to relocate Vunidogoloa, including building homes, fish ponds and a processor for helping to produce coconut oil.

And Fiji plans to move more than forty communities away from the coast, setting an example for vulnerable nations in managing rising sea levels in the twenty-first century.

Fiji is often a leader in climate policies – it was the first nation anywhere to formally ratify the Paris Agreement. And it is among those least responsible for climate change – Fiji emits a miniscule 0.006 per cent of global greenhouse gases. The move from Old Vunidogoloa, where only a few buildings are still standing which are slowly being overgrown by vegetation, has attracted praise as governments around the world worry about how to handle an accelerating rise in sea levels driven by melting ice from Greenland to Antarctica.

However, when hearing about places like Vunidogoloa, a natural reaction is that: Seas are rising around the world. What’s so special about Fiji’s coastline? Why isn’t everyone moving inland everywhere if things are so bad? For climate sceptics, that question is often a sneaky foot in the door to raise doubts on how far sea level rise is a factor, or whether it’s even happening at all.

From West Africa to Alaska in the US, scientists say a nasty cocktail of factors is forcing relocations from the coast. In some cases, it’s down to natural subsidence and other changes that have been happening for centuries but in others it’s down to us – a blend of more powerful storms, shifting ocean currents and sea level rise linked to human greenhouse gas emissions.

In cases like Vunidogoloa, sea level rise is the proverbial last straw – or perhaps bale of straw – that breaks the camel’s back and makes a vulnerable place uninhabitable. Sea level rise comes on top of flooding caused by more rain and more powerful storms that may also be stoked by greenhouse gases. And sea level rise will get steadily worse this century.

And it’s not just a few remote villages at risk. Worldwide, approximately 680 million people, about 10 per cent of the global population, live in coastal areas less than 10 metres above sea level, according to the IPCC, the UN panel of climate scientists.

The IPCC projects the number of people living in this low coastal zone could reach more than 1 billion by 2050.3 Fiji has been among the pioneers in figuring out what to do, starting right here on the beach in Vunidogoloa, on the island of Vanua Levu.

Botu laments the ruins of his first home as a few birds squawk from the dense vegetation behind the beach, apparently upset by our intrusion on what has become their territory since it was abandoned by the former villagers in 2014. The remains of Botu’s house are mostly buried in the sand, covered with dead orange and brown leaves from trees nearby. The sand on this lower part of the small beach is dark, soaked by waves at high tide.

Botu is wistful for the past – this is where he played as a boy and went fishing in the 1960s, by the shore with warm soft sand – a place where he said he expected to live his whole life. The new village is a better place to live, but being forced to move was a wrench for everyone. 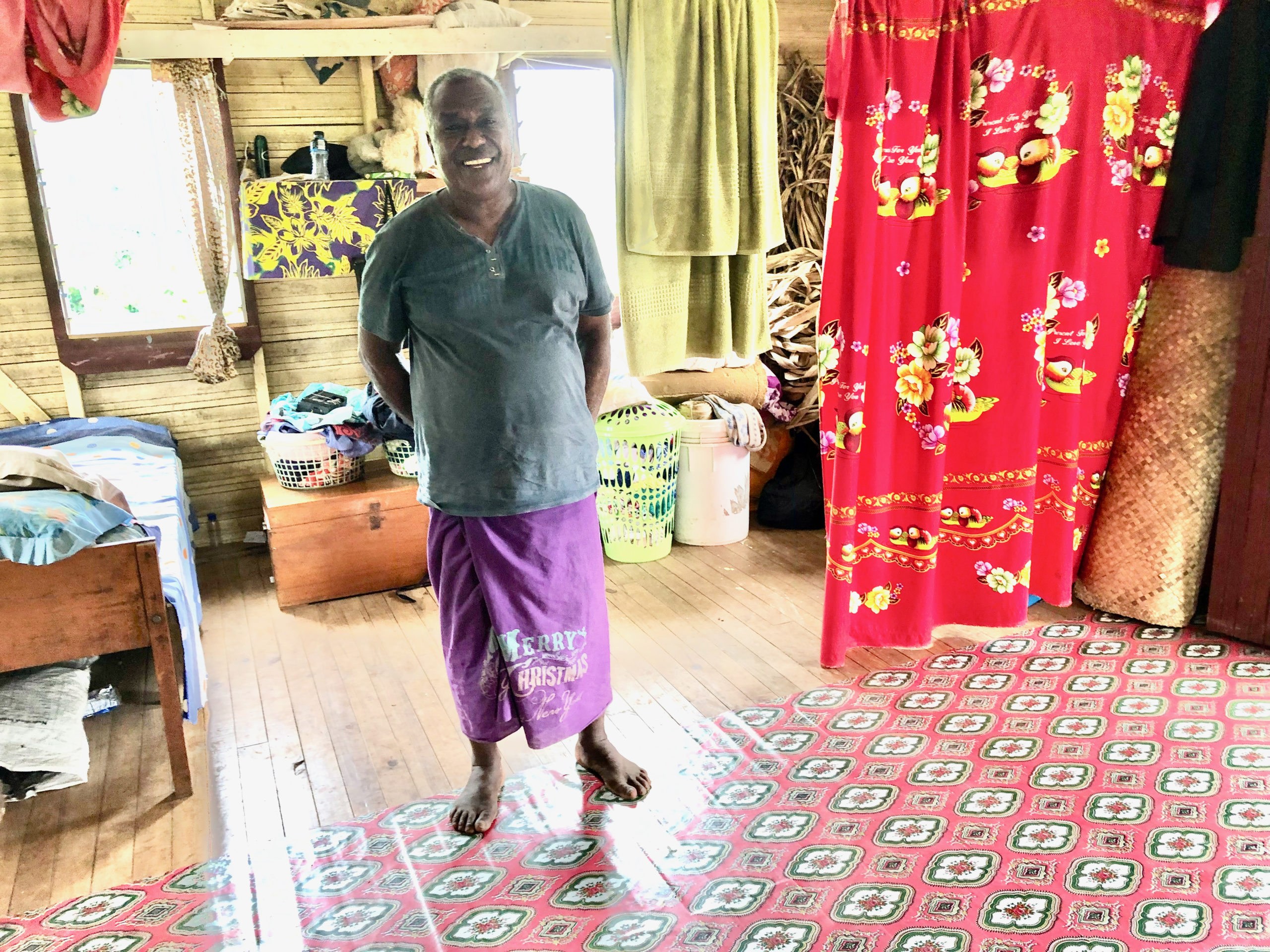 Simione Botu stands in his third home, built with help from the Fijian government in 2014 on a hillside about 1.5km from the sea. (Photo credit: Alister Doyle)

Up in his new home, Botu says: “People are happy living here, but it’s not really what we are wanting.”

The time for action is now.

Discover more snapshots of how people on the frontlines are managing the crisis of melting ice and sea level rise in The Great Melt by Alister Doyle.